DO YOU HAVE UNBALANCED AIRFLOW & DUCTWORK

DO YOU HAVE UNBALANCED AIRFLOW & DUCTWORK 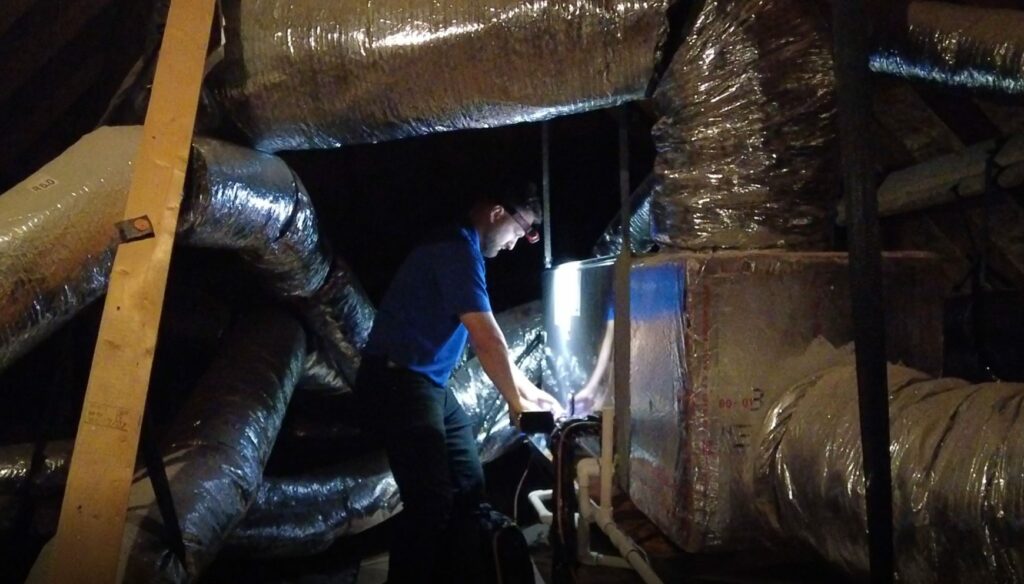 If ductwork is improperly sized, it can cause your system to become imbalanced. This results in each room receiving different amounts of air, with some rooms being hotter or colder than others. In many instances, this difference in air temperature can be dramatic.

Your ductwork comes in several different sizes. So it’s logical to assume it’s been specifically sized for your home. However, this isn’t always the case, and doesn’t necessarily mean the ductwork is balanced. And having larger ducts doesn’t mean they’ll provide your home with more air. In fact, the opposite is true because the force, or static pressure, in a large duct is actually less than it is in a small one.

Moreover, longer ducts have less static pressure, so the larger the distance from the system, the less airflow there may be. This means the rooms farthest from your unit are the slowest to heat and cool.

To further illustrate how important proper ductwork is, most ducts contain a damper used to balance airflow in each duct run. While there are several kinds of dampers, a common one is called a “balancing damper,” which has blades that open and close to allow more or less airflow through any given duct.

But even if your ductwork is sized perfectly and dampers are balanced, another common problem affecting airflow is leakage. With age, the seams in your ductwork may start leaking air. That’s because the glue, staples, sealant and tape used to hold your ductwork together can start to deteriorate. In fact, the average home duct system loses 20% to 30% of its air because of leaks.

Duct airflow issues can be solved through the following ways:

So what causes imbalanced airflow in your home? There could be a number of contributing factors, but one many people don’t consider is their home’s ductwork. In fact, unbalanced ducts can make one room feel like you need to wear a coat, while another can make you wish you were in shorts and a tank top. The differences can be that significant.

To see why this phenomenon occurs, it’s important to explain the actual functions of ductwork. Different-sized ducts work in conjunction to heat your home. Heating and a/c engineers design your system based on how large your unit is, and the distance from all rooms that need to be heated and cooled. It’s a fine science that’s based on the specifications of the system and the layout of your home. Ductwork is designed to move a specific amount of air that’s measured by cubic feet per minute (CFMs) to each of your home’s rooms.

Fall is here again, and winter is just around the corner. With the changes in seasons can come the challenge of having the proper amount of airflow in all your rooms. Some rooms may be colder than others, and this can be frustrating for you and your family.

At Service One, our professionals are highly trained in load calculations and duct sizing. They’ll advise the best solutions to fixing your airflow problems. So don’t be too hot or cold in your own home. We’ll ensure the temperature is just right in every room. Contact us today.

FLEXIBLE FINANCING FOR YOUR BUDGET

Fast service. The ladies in the office were professional and helpful. The techs are great at explaining in detail what needs to be done. Over all a great experience.

I was very impressed by the willingness to explain the reasons why my Air Conditioning Unit wasn't working.  Their explanations made sense and I got the impression they were interested in fixing the actual problem vs. figuring out ways to charge me for unnecessary services.  Thus far their solution worked and I am currently sitting in a cool home during the Texas summer.

I love Service One! From the ladies in the office to the knowledgeable technicians. They solved my issue without a hitch! Thank you Service One!

Why Choose Service One?